We’re now just past half way through the 2012 sportive season so the chaps behind the popular Southern Sportive series thought it would be a good time to reflect on the first half of the year and give us an insight on what’s planned for the latter part of the season. 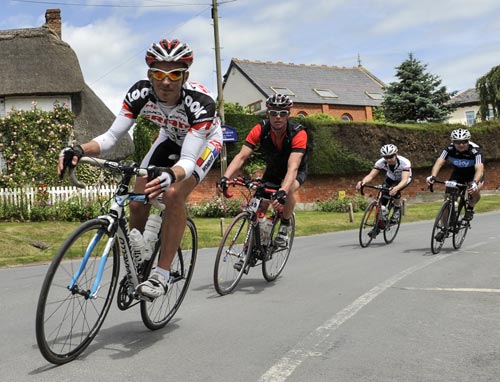 Southern Sportive events have seen increased numbers of riders this year, in spite of the wet summer and crowded calendar, which is a testament to their top notch organisation and keen value for money pricing. The year began with a new event, The Joker, which took riders on a innovative April Fools Day course featuring a number of exciting route options including the cobbled climb of the legendary Gold Hill. Next was the popular and well established St George’s Sportive from Princes Risborough which saw it’s biggest field ever, selling out at over 800 riders.

The biggest focus of the year though, and a genuine south of England coup, was the Wight Riviera Sportive in May. Another new innovation from the Southern Sportive crew, this event opened with a 25km closed road section and mass start, the first event of it’s kind to feature this in the country. Over 600 riders took to the course and locals lined the streets to cheer them on in their opening miles. This is an event to look out for next year.

As the summer unfolded, both the 100 mile Great Western and the ever popular Reigate Sportive managed to dodge the showers and attract the crowds, proving that even in the wettest drought on record, there are still great days to be had on the bike.

The year has also seen the introduction of a new £1 event photography feature at all events. Volunteer photographers and event partners have been lining up to help bring great event photos to riders for just £1 per download – will all proceeds going to worthy local charities. This new feature has been welcomed by riders and has raised hundreds of pounds for the chosen good causes.

While they take a short season break during the Tour de France and Olympics, the team at Southern Sportive will be preparing for more to come, starting on August the 8th in the Chilterns for the Woodcote Sportive. First run in 2007, this boasts an excellent course that straddles the Thames, contrasting the beautiful, rolling roads of West Berkshire on one bank with the spikier, tree lined profile of the Chiltern Hills on the other.

September 9th sees the 7th instalment of their headline act, The Southern Sportive itself. The original South Downs sportive, this is the event that defined the area as a sportive heartland. The course itself has earned strings of superlatives from riders and press alike over the years and still stands as one of the most beautiful and rewarding rides in the country. And for the second year, the 192km Wilier Gauntlet option will be there to take this amazing ride into the stratosphere.

The season ends with the Cotswold Edge sportive on October 14th. This was a new event in 2011 and a real hit with riders for it’s short(ish), punchy nature; the 128km course features a succession of Cotswold climbs that will (literally) take your breath away.

You can find full details of all events at southernsportive.com, and all forthcoming rides are open for booking.