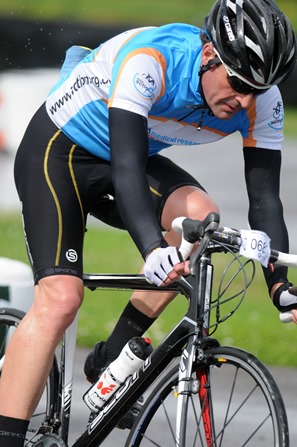 From not even owning a bike only six years ago, Chris Armishaw is planning to take on the 21 stages of the Tour de France in 2013 for children’s charity Action Medical Research. There is much to be learned from Chris’s mantra, “anything is possible,” and much inspiration to be gleaned from his epic cycling journey.

Not so long ago Chris Armishaw, 41, who lives in Billericay, Essex, and works for Sainsbury’s Property Division, was a self-confessed ‘armchair cycling fan’. Watching the sport on TV and following the Tour de France, he hadn’t ridden a bike since his teens.

Now, six years on, he is a qualified British Cycling Coach, has twice completed the Race Across the Dolomites in Italy and last year raised an incredible £28,000 for the children’s charity Action Medical Research by attempting the world’s toughest cycling challenge – Race Across America (RAAM).

And it doesn’t stop there for Chris, in 2013 he has decided to ride 21 stages of the Tour de France for Action Medical Research. He will clock up around 2,300 miles (115 miles per day) and spend around 170 hours in total in the saddle over 18 days.

Training has already started in earnest for Chris, in fact it never really stops. He rides every day, some of which over the cold winter months on his turbo trainer. Each weekend he clocks up 60-70 miles on the road both Saturday and Sunday. Although a keen cycle club rider, Chris also makes sure he trains solo to prepare for the particular conditions and challenge of the Tour.

Fundraising is also already underway. Inspired by the Tour’s 100th anniversary this year, Chris is targeting 100 companies for donations of £100 to reach his target of £10,000. Money raised will fund vital medical research for sick babies and children; offering hope to the many thousands of families who are dealing with the trauma of a baby born too early, striving to support a child affected by disability, or facing the challenge of caring for a child with a rare and devastating disease for which there is no cure.

Chris will be riding the equivalent first three stages of the Tour de France in Yorkshire, the starting point for the 2014 Tour. Having grown up in Tickhill near Sheffield, it’s only fitting that Chris should begin his challenge in Yorkshire, widely regarded as one of the spiritual heartlands of UK cycling. And as a family man it means he also avoids the cost and awkward logistics of flying to Corsica for the 2013 Tour’s start.

He heads out to Nice, France, 4 July to take on the final 18 stages of the Tour. The French leg of his epic ride will begin four to five days behind the main Tour. He aims though to reach Paris by 21 July – to meet up with other Action London to Paris riders and of course the spectacular finale of the 100th Tour de France!

He will be keeping a Blog and his Garmin navigational tracking device will also keep his supporters in touch with day-to-day, minute-by-minute, mile-by-mile progress.

“I’ve come a long way from first seeing an Action Medical Research advert for their London to Paris ride in January 2007, when I didn’t even own a bike! I was thinking aloud at home when my then eight-year-old daughter said, “Dad will you stop talking about it and just do it!” That’s when I knew it was time for me to take the plunge.”

Despite a lack of preparation, Chris successfully completed that first London to Paris ride. He says, “I remember being so overwhelmed by the other seasoned riders, not least because I had showed up in the wrong gear and inappropriate footwear.”

That first trip in 2007, and the support of the fellow riders who helped spur him on, re-ignited his passion for riding and he hasn’t looked back since. He bought his first decent road bike, joined a cycling club and became a fixture on the next four London to Paris rides for Action. Chris also cycled Action’s RIDE24 in 2012 – the ultimate endurance bike track challenge and qualifying event for Race Across America (RAAM).

Now also an ardent supporter of the charity, in 2012 he attended the Buckingham Palace reception celebrating the 60th Action Medical Research anniversary hosted by HRH the Duke of Edinburgh, is an Action Partner and an active member of the charity’s gala event – Champions of CycleSport Dinner – planning committee.

“I owe my fervour for cycling to the team at Action Medical Research. It is a brilliant charity that I am proud to stay involved with and raise even more money to fund vital research to help sick babies and children. Wish me luck for my Ride 21 Tour de France challenge!”