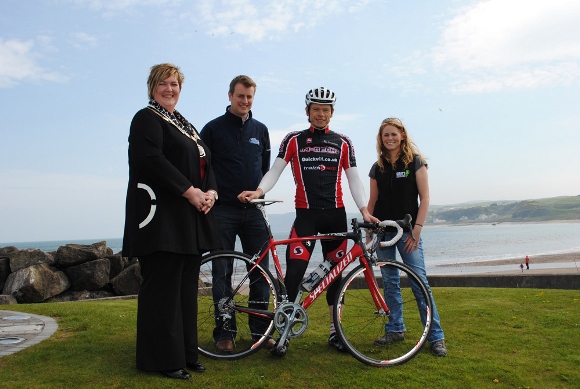 Michael Hutchinson, originally from Antrim and hailed as the one of the top British time trialists, recently joined up with sportive event organiser, Beverley Pierson from Outdoor Recreation NI, Councillor
Sandra Hunter (Chairperson of Moyle District Council) and Neil McGuigan from Chain Reaction Cycles Flagship Store in Belfast to announce the date for this years Giant’s Causeway Coast Sportive.

This popular cycling event, which is sponsored by Chain Reaction Cycles Flagship Store in Belfast and funded by Moyle District Council, is set to carry on from its huge success in the last two years by expecting to attract up to 1400 cyclists to the North Coast and Glens of Antrim on Saturday 7th September. The prolific multi national time trialling champion was in awe as he cycled part of the route stating “With these views, you wouldn’t want to be anywhere else on your bike”.

Michael only took up cycling when he was a student and never intended on becoming a full time bike rider, “I just wanted to do something to stop me getting fat, and I didn’t want it to take all day”, but
as it turned out he was pretty good on the bike and has since won British titles at every distance from 10 miles to 100 miles, and is a two-time winner of the 12-hour championships. He has also won the
British 4,000m track individual pursuit title and recently secured the winning position at the Irish national time trial in Cahir, Tipperary last year.

Michael believes that events like the Giant’s Causeway Coast Sportive are an excellent way to get people into the sport especially as it grows more and more popular, “Cycling has changed a lot – when I started, there was no such thing as a sportive.”

“I am a huge advocate of cycling sportives in general so it is even more exciting to have such a talked about event growing from strength to strength not so far from my home town,” added Hutchinson.

The event, which is also being supported by 2 of UK’s best selling cycling magazines, Cycling Weekly and Cycling Active, starts and finishes against the beautiful backdrop of the sea front in Ballycastle, offers participants a choice of 3 routes (35miles, 80miles, 115miles) each taking in the spectacular Giant’s Causeway Coast and the stunning Glens of Antrim. Online entry is now open and more information including detailed route descriptions, maps, online booking and indeed advice from cycle training experts, Dig Deep Coaching, is available on the event website –

For the second year, event organisers have also teamed up with Marie Curie Cancer Care and Action Medical Research to encourage participants to fundraise for these extremely worthwhile causes which
will certainly act as a great motivator when the hills become tough. 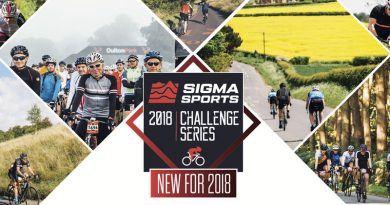