Aberdeen born Andrew Mitchell, who lives in Loch Leven, aims to raise an incredible £10,000 to support terminally ill people and their families when he takes on a Charity Pledge Place in the Marie Curie Cancer Care Etape Caledonia on 10th May 2015. 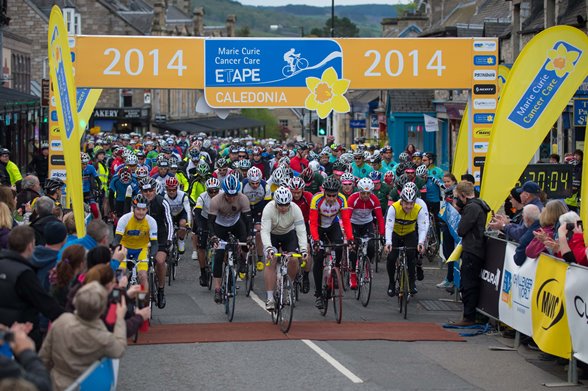 Inspired by a colleague who was battling cancer, Andrew took part in the 2013 edition of the 81-mile closed road cycling sportive, raising a massive £3,000 for Marie Curie Cancer Care leading him to become the event’s fourth biggest fundraiser that year. Seeing his colleague make a full recovery after receiving vital treatment and support and knowing the potential impact of the money he raised in 2013, he is driven to meet his increased target this year.

Having no previous history in endurance sport until his first attempt at the Marie Curie Cancer Care Etape Caledonia in 2013, 38 year-old Andrew cycles for leisure as part of his daily commute and decided to participate as he thought it’d be a “fun new experience and fitness challenge”.

Missing out on the 2014 sportive due to living overseas Andrew is raring to go for this year’s challenge: “I made lots of rookie errors at the Etape Caledonia in 2013; clothing, fuel, not getting enough sleep the night before and stopping to chat! But I know what to expect and how better prepare myself this time round, I’m hoping to knock 1.5 hours off my previous time and I’ve set a target time of 4.5 hours.

I’m a bit of a fair weather cyclist so I have my turbo trainer set up already for indoor training. But, I have been doing daily 20km commutes to my nearest train station and 22km loops around Loch Leven. My intention is to get out and build up to longer distances between now and then and I’ll hopefully get out for a practice run too. I’m looking forward to crossing the finish line with my wife and five month-old bump [due in September] there to cheer me on!”

Andrew is one of thousands of participants signed up with a Charity Pledge Place to generate vital funds for the event’s Official Charity Partner, Marie Curie Cancer Care. The £350,000 raised through the event last year contributed towards the charity providing care for more than 40,000 terminally ill people and their families across the UK.

Marie Curie Cancer Care has set a fundraising target of £380,000 for 2015, prospective participants wishing to take part in the legendary event, which sold out of general entries in just three days, can support the charity by signing up to a Charity Pledge Place available from www.etapecaledonia.co.uk.

James Wright from Marie Curie commented: “Andrew’s keen to get out there and beat his target and we’re so grateful for his support. It’s thanks to participants like him that want to challenge themselves, meet new people and raise money that we’re able to support more people living with a terminal illness.”

Regarded as a must-do event, the UK’s premier cycling sportive attracts over 5,000 participants every year. Set in one of the most breath-taking locations in the UK, the Marie Curie Cancer Care Etape Caledonia is an 81-mile closed road sportive that both starts and finishes in Pitlochry, Perthshire on 10th May 2015.

James Robinson, Managing Director of event organisers IMG Challenger World added: “It’s fantastic to hear stories like Andrews’, of participants using the exciting Etape Caledonia sportive to raise vital funds for Marie Curie Cancer Care. Their support means our Official Charity Partner will be able to provide care for even more terminally ill people in the UK this year. We wish Andrew all the best in reaching his target and look forward to celebrating his achievements with him in May”.