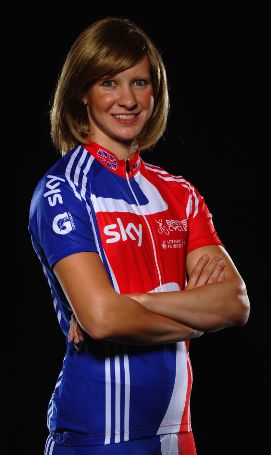 Children’s charity Action Medical Research is pleased to announce Team GB cyclist Joanna Rowsell, double gold medallist at last weekend’s UCI Track Cycling World Cup, as a new ambassador for its programme of cycling events. To celebrate the new partnership the charity is giving people the chance to win her signed race number in a special ‘tweetathon’ this afternoon (Thursday 23 February) from 3-4pm. Follow @amr_events for details on how to enter.

Joanna was the star of the women’s team at last weekend’s race meeting, the first event to be staged at the Olympic velodrome, winning first as a member of the world record breaking women’s pursuit team before a second win in the individual event. She now has her sights set on adding the Olympic team pursuit title to her name (the individual event will not be contested at the summer Games).

Action Medical Research has established a very strong reputation for its programme of challenge cycling events and Rowsell is the latest in a string of cycling stars to lend their support to the charity.

The charity’s 2012 ride portfolio features 25 rides, including three new ones exclusively for women, as well as the RIDE100 series of one-day regional UK rides. There are also a number of longer-distance challenges including UK End2End, taking on the iconic Lands End to John O’Groats route over nine days, and the biggest London to Paris ride in the charity sector.

Joanna said: “I’m really excited to be Cycling Ambassador for such a worthwhile charity and one that is so passionate about cycling. Action Medical Research runs a really varied programme of rides and it’s great to see so many new events for women included. There’s a huge choice of things for cyclists to get involved in, from one-day rides to longer challenges like the UK End2End – I’ve ridden the Land’s End to John O’Groats route myself so know first-hand what an amazing ride that is.”

Jo Pickard, Head of National Events at Action Medical Research, said: “We’re delighted that Joanna has agreed to become a Cycling Ambassador for Action Medical Research. Our cycling events raise vital funds for our important work to help stop the suffering of babies and children caused by disease and disability and having a track gold medallist and rising star to help promote what we do is fantastic. Joanna in an inspiration and will help raise awareness of our unique range of charity rides as well as our vital medical research.”

Money raised by the charity helps fund medical research into conditions affecting babies and children. Action Medical Research is celebrating its 60th anniversary in 2012 and has been funding medical breakthroughs since it began in 1952. The charity is currently supporting work around meningitis, epilepsy, cerebral palsy, premature birth and some very rare conditions that severely affect children.