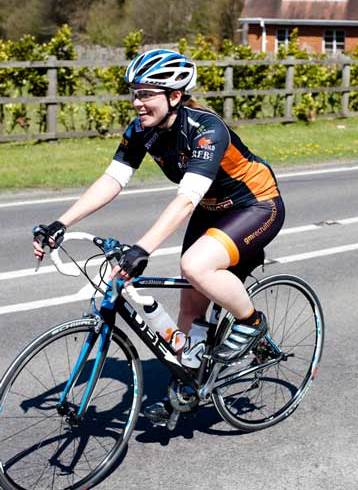 We’ve just received this great story through from the organisers of the Halow 250 cycle challenge about one of their riders from this years event. The ride takes place each year over 3 days starring and finishing in Guildford via Northern France. In 48 hours the route covers a total of 250 miles through Surrey, Northern France and Hampshire. The aim of the ride is to raise funds and awareness for the Surrey based charity Halow Project.

Mel Simmonds was one of a team of 75 people who cycled into Guildford Rugby Club having completed 250 miles and 11000 ft of climbing over three days on the 2nd annual Halow 250 charity ride, raising £60k in the process. What makes Mels achievement even more remarkable is that only months ago she suffered horrendous injuries and was expected to struggle to walk, let alone cycle anywhere….

A dream holiday on the Ionian island of Kefalonia in western Greece, with her boyfriend, Jay, in July 2010 saw Mel Simmonds fulfilling a dream to visit this idyllic island. Little did they know that the trip would end in disaster with Mel suffering multiple injuries and being repatriated to the UK for emergency medical treatment.

“The day had started perfectly”, said Mel “we’d been diving in clear crystal blue waters all morning having rented a quad bike for the journey to the dive shop to hire our equipment. We were on our way back to drop off the bike and head on to our hotel when things went horribly wrong.

“I don’t remember exactly what happened after the steering on the bike locked – just the sheer panic of going off the road and plummeting down over rocks towards the sea below.”

Both Mel, who was driving, and Jay were thrown from the bike crashing and bouncing across rocks and rough fauna before landing feet from the sea. Not only were Mel’s legs badly broken in several places, but she also suffered a broken nose, and broken finger, as well as numerous deep cuts and grazes all over her body.

Mel was in considerable pain, but couldn’t have any of the required medical operations in Greece, as the insurance company wouldn’t cover their use of quad bikes. (Something she later wants to highlight to people considering hiring such vehicles) She and Jay had to find  £8,000 to get home, which involved two flights, a ferry crossing and some 16 hours of painful and stressful travel in various ambulances.

Back in the UK, Mel spent six months in a wheelchair and was unable to work or study. She has since undergone several operations and quickly had to come to the realisation that her injuries would be life changing and that there would be things that she would never be able to do.

However, Mel’s positive attitude, cheerful disposition and determination not to let this accident control her life led her to apply for a job working at Surrey charity, the halow project. Mel works on the Building Futures team, this team works with groups of young people with learning disabilities and helps them to gain confidence and take control of their own futures.

Through many other programmes and initiatives halow now supports over 150 young people, with learning disabilities on their journey into and through adult life. The halow project is a charity committed to supporting young people with a learning disability to have the same life choices and chances as any other young person.

Since she started working for the charity, Mel has been involved with several fundraising activities and in May 2013, Mel’s love of cycling was ignited when she took part in halow’s 250 Challenge.
After some thought and worry about her long term injuries and discussing the challenge with the organisers she and her colleague at halow decided to commit to the challenge.

The first obstacle was bike selection, Mel’s network of friends came to her aid and with their help and some back up advice from George and Mark from the 2Boats team, she settled on the Cube Peloton Pro Triple 2013 road bike. Having got the bike, Mel set up her training plan that took place across what turned out to be a harsh winter, but this didn’t stop her. The ride organisers were again on hand to help with advice putting together a programme with Mel carefully building up her road mileage and helping her to gain in confidence on the busy roads of Surrey. As the months moved on and gradually the days got longer the 2Boats team arranged ride outs which Mel took part enabling her to meet other cyclist before the main event who rode at similar she could ride the event alongside. The culmination in the ride outs was a well-supported Good Friday ride to Brighton which took in Ditchling Beacon Mel passed with flying colours and finished feeling confident in meeting the challenge head on.

The event brought Damon Hill (halow Patron) to launch the ride, the best weather of the year, 75 cyclists, 25 support crew and various media outlets including Sky Sports who ran a feature on Damon and the charity ride throughout the day. The first stage was a 75 mile ride through Surrey, Hampshire and Sussex finishing at Portsmouth Dockyard and a welcome drinks reception for all on the Warrior Warship.
Followed by an escorted ride through the naval dockyards to a comfortable bed and an overnight sleep courtesy of Brittany ferries and the thought of an early start and 110miles of cycling to Caen.

The weather was again perfect, with good support and regular feed stations and lots of encouragement, Mel cycled into Caen in good time for a meal and a celebratory drink having comfortably broken the land mark of 100 miles in a day. It was then back on the overnight ferry for a good night’s sleep in preparation for the last leg of the ride back to Guildford.

The final leg was 50miles up through the beautiful Sussex country side and allowed time for a leisurely ride and for all the cyclists to savour what they had achieved. They finished with a mass ride in to Guildford Rugby club and an emotional welcome home party attended by many of the young people at halow and of course family and friends.
Plus a great deal of pleasure in raising over £60,000.

For Mel, “the halow 250 event helped me enormously – I had no idea just how much it would mean. Physically, the ongoing pain I suffer stopped when I began training and getting fitter ahead of the challenge. I felt great during the challenge and never felt fitter health wise. But more than that, my job and work with halow has helped me both physically and mentally to come to terms with what happened and overcome my injuries.”

Mel’s courage and determination have set a benchmark for anyone who has endured such a horrific experience. “I suppose my accident taught me to never give up and live life to the full,” she said.

“I absolutely love my job with halow and find the work very rewarding. My new found love of cycling would never have happened had it not been for my accident and working with halow. I can’t wait to ride again in the 2014 event in May and I am already trying to get friends and family to sign up and take part. It’s an inspiring ride through beautiful English and French country side with incredible people and is suitable for novice and more experienced riders,” Mel added.

Following the success of last year’s event, 2Boats will once again be organising the halow250 over the first May bank holiday weekend, to raise essential funding for the halow project so come and join us for a great charity bike ride.

RCUK Sportive of the Year